Alternate Top Bevel teeth are actually two different teeth, which are a mirror image of one another. The top of the tooth, which is the part that hits the bottom of the groove or kerf is ground at an angle, causing the tooth to only cut one corner out of the kerf. The next tooth in the rotation has the opposite bevel, cutting out the other corner.

ATB blades are designed specifically for crosscutting. The angle of the tooth scores the surface of the wood in advance of the cut, cleanly cutting the wood fibers, before the following teeth remove the chip. This provides for a much smoother cut, with much less chance of splintering the surface of the wood. It is fairly typical to combine ATB teeth with FTG teeth, allowing one FTG tooth for every four or even six ATB teeth, making an ATBR configuration. This FTG tooth may have the corners relieved or chamfered, to prevent it from cutting into the corners or touching the sides of the kerf. FTG teeth used in this way are referred to as “raker” teeth, and provide the dual purpose of cleaning out the bottom of the kerf to be flat, while removing any sawdust that remains in the kerf from the ATB teeth. Combination circular saw blades almost always have both ATB and FTG teeth, with the FTG teeth being followed by a gullet. This is to make the ATBR blade more efficient for ripping, than what the ATB teeth alone could provide. 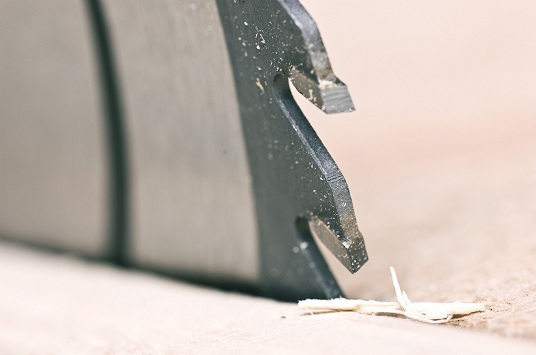 ATB blades are typically designed with a slightly negative hook angle, to help prevent the blade from pulling itself through the workpiece and cutting too fast. By reducing “self-feeding”, it’s easy to control the cutting. Neutral angles are often seen too. Slower cutting feed rates help these blades provide an excellent finish quality with minimal tooling marks in the wood. Top bevel angle is around 10°-20°. Higher bevel angles are seen on HiATB teeth.

There are two drawbacks to ATB blades. First of all, they are designed to be a slow cutting blade, so you would not want to use them for high volume, especially high volume ripping. The second disadvantage is that they dull quicker than FTG blades, due to the bevel angle of the teeth. They are also harder to resharpen, requiring specialized equipment and knowledge, making the cost of sharpening higher than for FTG blades. Although beveled edges cut without significant defects like splits along the fibers, they are likely damage-prone. ATB blades are not absolutely necessary for all types of crosscutting. When fine finish is needed, especially for woods with a loosely packed grain, such as Mahogany, which can splinter easily, ATB tooth profile provides a superior finish. Its use is spread on veneered materials and melamine. However, for cutting dimensional lumber used in rough carpentry, a fine finish is not needed and splintering is not an issue. Therefore, blades used in handheld circular saws don’t have ATB teeth.