Alternate Top Bevel with Raker blades are a combination saw blade, providing the cutting capability for both crosscutting and rip cutting. These blades are also known as “multi-purpose” blades or “4+1” blades. The intent is to make a blade which can be used for any common woodworking cut. 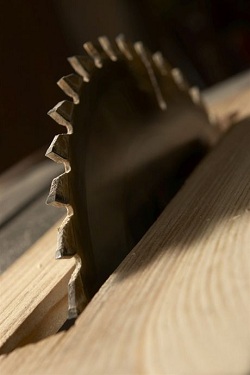 As a combination blade, ATBR blades are a compromise, providing speed and quality at the same time. They sacrifice some of the speed of a rip cutting blade, to gain some of the smooth finish provided by a crosscut blade. This is done by using a combination of ATB (alternate top bevel) teeth and FTG (flat top grind) teeth. Typically the ratio between these two types of teeth is 4 to 1, with four ATB teeth for every one FTG tooth, although other ATB-to-raker ratios exist as well. The ATB teeth on this type of blade cut the corners of the kerf, leaving the center of the bottom of the kerf for the FTG tooth. In these cases, the FTG tooth is referred to as a “raker.” It’s not only cleans out the bottom of the cut, but also removes any sawdust left by the ATB teeth. With many ATBR saw blades, the gullet behind the FTG tooth is larger, giving the appearance of having a missing tooth on the saw blade. Some ATBR blades have the corners of the FTG teeth relieved or chamfered. This helps reduce friction and splintering, preventing the FTG tooth from coming in contact with the top of the sides of the kerf.

As combination blades, these will have between 40 and 80 teeth. It is a good general-purpose blade for the hobbyist or for cutting architectural moldings. While it cannot cut as smoothly as an actual crosscut blade, the quality of cut provided by an ATBR blade is impressive. Although actually combination blades, the ability of ATBR blades to be used for cutting non-wood materials, such as plastics and non-ferrous metals has given it the name “multi-purpose” as well. This term, which is different than “combination,” refers to the ability of using a saw blade for cutting multiple types of materials.