Saw blade tooth geometry determines how the tooth on a circular blade will face the material when passing through. Ideally, only the tip of the blade tooth will make contact with the workpiece being cut. Any other contact is just wasted friction, increasing power consumption and reducing efficiency. To help ensure that only the cutting part of the tooth is in contact with the wood being cut and the blade rapidly gets rid of waste, tooth geometries are carefully designed and ground. Essentially, there are several angles which have a part in this process. Angles describing circular saw blade clearance are: hook angle, top clearance, top bevel angle, radial and tangential side angles.

Once the tip of the tooth has done its job, the rest of the tooth needs to get away from the wood, in order to avoid adding unnecessary friction. The top of the tooth is ground away, creating a top clearance. If you were to draw a circle around the blade, where the tips of the teeth touch the circle, you should be able to see some space between the back of the top of the tooth and that circle. That space is caused by the clearance angle; the tooth slightly descends when looking from the tip backwards. This angle varies between 12 to 15 degrees, depending upon the blade design.

When looking the front surface of the tooth, the one that cuts, it’s obvious that the upper line is not always straight. Top bevel is flat for FTG and angled for ATB tooth design. The higher the clearance angle, the better the saw blade is for cutting veneers, plywood, laminate and melamine. HiATB blades have bevel at 30° or more, offering extra-fine cut. These saw blades get dull quickly.

Most splintering of laminated materials isn’t from the face of the tooth or the cutting action of the tooth, but rather the sides and top of the tooth coming into contact with the freshly cut material, sticking to and pulling out splinters of wood. Circular saw blade maintenance consists of re-sharpening clearance angles so taking care of original measures is important. High clearance angles are an essential part of avoiding blade overheating and associated burning of the workpiece. They help to remove the particles of sawdust from the cutting line. Since the friction between the blade and workpiece is reduced, the blade doesn’t heat up as much. Of course, this has to work in conjunction with other elements, such as the gullet size. The expression “side clearance” can be mistaken for “zero-clearance insert”. Zero-clearance insert is used as an addition to the circular saw for minimal splintering, clean and chip-free cut when cutting expensive sheets. 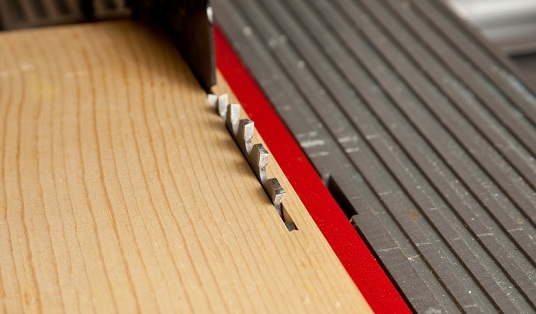