Crosscutting is the act of cutting across the grain of the wood. It is much harder to cut in this direction, than to rip cut. For this reason, crosscutting is much slower than ripping. Crosscut blade cuts perpendicular to the grains of the wood and requires clean cutoff without jagged edges. The saw blade parameters should be chosen to best suit the cut. Under this includes: a large number teeth with about -2° to 8° hook angles, special tooth design like ATB, ATBR or HiATB, and slower circular saw speed settings. 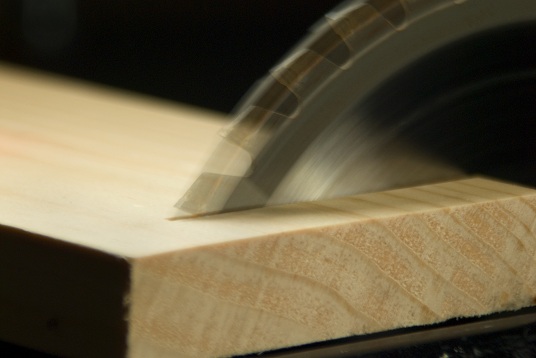 Radial arm saws are much better for crosscutting than table saws. Not only does having the saw blade mounted above the workpiece make for much better accuracy; but the longer fence allows you to maintain much higher accuracy for angles. A table saw’s miter gauge is only six inches across, compared to the length of a radial arm saw’s fence, which is as wide as the saw table.

A saw blade won’t tear out the wood if the number of tooth is high enough. Crosscut circular saw blades typically have a high number of teeth, usually 60 to 100. The saw blade can be used for cutting moldings, oak, pine or even plywood if specialized blade is not available. They are mounted with a zero or slightly negative hook angle, reducing the aggressiveness of the cut and the speed with which the blade moves through the material. Hook angles greatly affect the control of cutting; the smaller the angle, the less pulling from circular saw you can expect. The most common sizes of cross-cutting circular saw blades are 7-1/4″, 8, 10, 12 inches in diameter. Gullets on crosscut saw blades are much smaller, because each tooth is taking a much smaller bite out of the material, producing less chips and sawdust. Because the gullets are smaller, the blade is able to maintain itself more rigid, with less vibration.

Due to the greater number of teeth and reduced vibration, crosscut blades leave a much finer finish than rip cut blades do. On a good saw, with minimal vibration because of a large amount of teeth, they can leave a fine enough finish to not require planing or sanding. The biggest problem with crosscutting is wood splintering. This can be caused by two different things. The first friction between sides of the teeth and the surface of the wood, as the blade exists out of the cut. The second cause of splintering is the tooth of the blade pushing the wood fibers to the side, before cutting through them. Some types of woods are more susceptible to this than others. 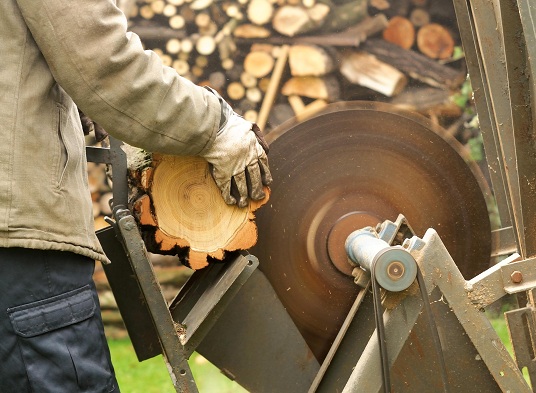 To combat the problem of splintering, most crosscut saw blades are alternate top bevel (ATB) ground. This means that the top of the teeth are ground at an angle, so that each tooth is only at its maximum dimension on one side, the other side of the tooth is lower. The next tooth around the circumference of the blade would be beveled in the opposite direction.
ATB blades reduce the possibility of splintering by reducing the tendency to push the wood fibers aside. Since a smaller amount of cut is being made, the wood fibers cut more cleanly and quickly. For cases where thin veneers are in use, such as with some types of cabinet grade plywood, HiATB or High Alternate Top Bevel blades are used. The difference between HiATB and ATB blades is that the angle of bevel is more extreme on the HiATB blades. Extra-fine cross cutting requires at least 80 HiATB teeth hooked at 2° down to -5° degrees. Combination of four ATB with one FTG “raker” tooth is seen on ATBR saw blades. A large gullet separates the groups of teeth on ATBR set.

Crosscut blades have a higher chance of heat buildup than rip cutting blades, due to the longer cutting time required to make the cut. This comes out of a high tooth number and dense configuration with small gullets. Amount of teeth can be too large for wood being cut, making friction so high and causing temperatures over a few hundred degrees that could easily burn the wood. The fine dust fills gullet behind each tooth creating the negative effect on both sides: clogging the saw blade and firing the wood. For this reason crosscutting saw blades have features like perma-shield coating to reduce the possibility of burns and finish a woodworking job without any troubles. Thanks to Teflon or tungsten carbide coating on steel, even in extreme conditions the risk is reduced, no matter are you working with softwood or hardwood. Fire outbreaks due to clogged sawdust and waste are very rare. Another way of solving the problem with overheating is dissipating heat through the tiny air holes on a circular saw blade. Constant expanding and shrinking of the blade plate during the hot and cold periods warps the steel saw blade. An uneven saw blade won’t run straight, leaving a messy finish, and it could overburden the motor of a circular saw. Expansion slots are added to make space for metal expanding and shrinking. Therefore, it is quite common to find expansion slots laser cut into these blades, even though compatible rip cutting blades from the same manufacturer may not have them. Use saw blades for intended purpose only, which is cross-cutting in this case, and change the blade if necessary since superior rip blades perform much cooler. It’s important to make adjustments of the rotation speed. Circular saw can chip the wood while cutting if a plank is not cut with performance appropriate to the wood type, or if it’s processed too fast.