An expansion slot is a laser-cut slot on the blade plate designed to disperse heat and prevent blade deformation caused by overheating. The process of cutting, even under ideal circumstances, involves a lot of friction. While the teeth of the blade are removing material, they are also rubbing against the sides of the kerf and the tip of the tooth rubs against the material in the path of the cut. This friction can generate an amazing amount of heat, enough to singe the wood and even warp the saw blade. The saw blade is quite hot even after cutting; you can easily get burned if you just tap it with your hand for a second when trying to unmount it off the circular saw. The best way to avoid burns is to leave blade running for a minute or two after cutting. However, this does not solve the problem with overheating.

As the temperature of metal increases, it tends to expand, obeying the laws of thermodynamics. However, the temperature of the blade will normally not be consistent across the whole area of the plate, forcing it to expand unevenly. Generally speaking, the plate of the blade gets hotter than the teeth, although the teeth are experiencing the majority of the friction. Even though the teeth have the most friction, they are also are cooled the most by air movement. So, as the plate expands, it needs somewhere to go. Since the outer edge of the plate, where the teeth are attached is not as hot, it isn’t expanding as much. Most saw blades have coated teeth, meaning the outer edge is even more solid. That leaves only one direction for the plate to expand, deforming towards the side. This is what causes warping. 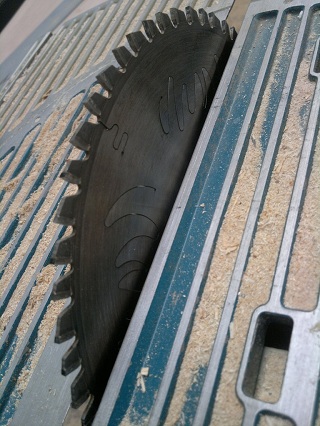 Warped saw blades become garbage, so it is helpful to be able to prevent them from expanding unevenly, to avoid the risk of warping. One way in which this is done is to use denser alloys in the blade plate. Another is by laser cut slots periodically through the blade plate. Engineers thought of this idea to allow the expansion of the saw blade “inside” itself. Although these slots look like they are done for artistic purposes, they aren’t; they are there so that they can absorb the expansion of the metal, preventing blade warping.

The blade rotation simultaneously means airflow through the laser-cut plate, which cools it rapidly. That’s one benefit of laser-cut slots; they serve as the ventilation slots. If the blade is so hot after you finish the job, imagine what happens during the operation, at the moment when blade slices through the lumber or plastics! These expansion slots also play a part in reducing blade vibration. With many blade designs, the ends of the expansion slots are connected to holes in the center of a saw blade, positioned towards the arbor. These rounded holes are there to reduce vibration. At times, anti-vibration holes are filled with a softer metal, such as copper or brass inserts, which also helps to suppress the vibration of the blade by distributing shock over the entire plate. Such copper plugs inserted at the end of an expansion slot also reduce the noise and help to dissipate heat, extending the life of a saw blade. Vibration is a problem in saw blades, because it, along with warping, are what cause the curved cut marks you see in a freshly cut piece of wood. By reducing vibration and the risk of warping, a blade will run truer, with one tooth faithfully following the path created by the other. That ultimately results in a smoother finish, with less visible tool marking (those curved cut marks).

When handling saw blades, especially immediately after cutting, be extremely careful of heat. It is not uncommon for blades to become hot enough to burn your fingers. However, blades which are left running after the cut cook quickly; acting as their own ventilator. The expansion slots help with this, acting much like small fan blades to force the air to move. An ability to resist shocks, lower cooling time, less noise and power consumption are just some of the advantages.