FTG or Flat top grind is what most of us think of when we think of a saw tooth. It is the simplest tooth geometry, looking like a small, flat chisel. This is the most common tooth geometry used on rip cutting blades, although it is not as effective for crosscutting.

A square FTG tooth cuts the entire kerf using both sides, all at the same time. Because of that, it creates a quick cut, with clean corners. The blade plate is perfectly balanced even if some teeth are damaged. Of all the tooth designs, this is the one which is the most efficient for cutting speed. However, of all the types of saw teeth, it is the most likely to cause splintering and chipping of the material being cut. Since this is not normally an issue for ripping, using a FTG tooth on a rip cutting blade only makes sense. 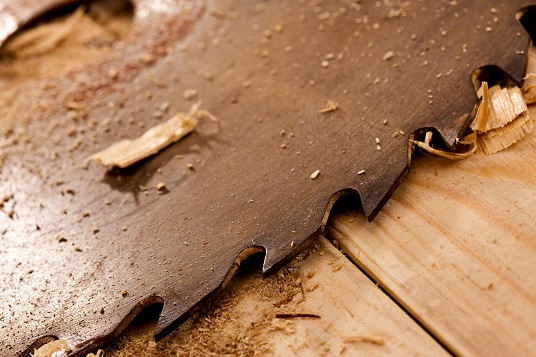 Due to the simple shape of these teeth, they are extremely durable, not becoming dull easily. Another factor that adds to this is that FTG blades are normally used for ripping, which applies less force than crosscutting. Cutting along the wood grain requires less time and power since separating the wood grains that are parallel to the plank is easy. The wood won’t splinter and chip as it does when it’s cut across the grain. That’s why durable FTG saw blades are used for rip cuts, the speed is much more important than a quality finish. They are also the easiest to sharpen. While some sharpening services may not be equipped to handle all types of blades, they can all sharpen FTG blades.

Typically, FTG teeth are mounted at a high positive hook angle of about 20 degrees. This works together with the design of the teeth to make for a very aggressive cut, especially when ripping. This configuration requires large gullets in order to get rid of debris fast. When FTG teeth are together with other tooth configurations, such as ATB (Alternate Top Bevel), they are called “rakers” and perform the function of cleaning out the bottom of the kerf and removing sawdust. The square “raker” tooth leaves a rough finish, but slices through the lumber rapidly while the ATB teeth cut the corners. After two pairs of alternating teeth, the set of 5 ends with a FTG tooth completing an ATBR configuration. To help prevent the FTG teeth from causing splintering and dulling in these cases, they are often ground with the corners chamfered, preventing the tooth from hitting the corners and sides of the kerf. Such tooth design combines regular but a bit shorter FTG tooth and it’s called TCG pattern.