The hook angle, also referred to as the rake angle is the term used to describe the direction of the blade’s teeth, as compared to the rotation and central axis of a saw blade. If you imagine a line going from the exact center of the blade (or arbor), to each tooth, having the front of the tooth (the part that slices through the wood you are cutting first) directly on that line would be a zero degree hook angle. The hook angle of the blade is described in comparison to that imaginary line. The same line passing along the entire surface of saw blade is the diameter of circular saw blade. A positive hook angle would mean that the teeth are angled more towards the angle of rotation, while a negative hook angle would mean that they are angled backwards, away from the direction of rotation.

The higher the hook angle, the more aggressively the saw blade will cut the material. This is great for getting through a lot of material fast, especially when you are ripping. But you pay a price in the smoothness of the cut which is provided. Excessive hook angles can cause the teeth to chip the wood you are cutting, especially when cross cutting. For that reason, hook angles of more than 20 degrees are only used for ripping, not for crosscutting. The feed rate will also be high, meaning the circular saw will more likely pull the lumber in cutting direction.

While a positive hook angle is great for ripping, a negative hook angle is better for crosscutting. The negative face of the tooth is much less likely to cause chipping in the surface of the wood as it’s oriented in a counter-rotation direction. This type of hook angle also provides an opportunity to better control your work, as the blade is much less likely to try and pull the wood through the saw or the saw blade through the wood (depending if you are talking about a table saw or a radial arm saw). Negative hook angle is good for making miter cuts on architectural moldings, cutting plywood panels, or cutting non-wood materials, such as plastics as well as metal. Angles between -2° and -10° are recommended for plywood, MDF, OSB, laminate, melamine boards, and particleboards. 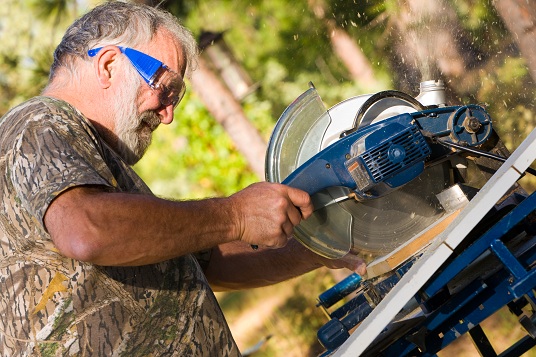 Blades with a negative hook angle won’t cut as fast as those with a positive hook angle can. The feed rate or how fast the blade gets rid of debris and notches when cutting through the wood is very low. This increased the chance of heat buildup, especially when cutting through thick, dense woods. To prevent blade overheating on thick material (over 2” thick), make a series of shallow cuts, each of which is deepening the thickness (kerf, cut slot) by about another 1/2”. This is extremely easy to accomplish on a radial arm saw, but difficult on a table saw. Cutting takes more time bringing the heat as a threat, but however, the overall finish is very neat.