Thin kerf circular saw blades are specialty blades, created for minimizing material waste in expensive hardwoods and hardwood plywood. They leave very thin width of the cut due to its actual tooth and plate width. While a typical circular saw kerf will be 1/8″ to 3/16″ (0.125″ to 0.187″), thin kerf blades cut a saw kerf of 3/32″ (equaling 0.093″) or less. While that 1/32″ of material may not seem like much, it can add up to be a great difference for materials which cost as much as $60.00 per board-foot. Blade can save at least 30% of the material comparing to the full kerf blades. The common application of thin kerf blades is for dimensional or engineered lumber where precise sizes mean a lot. Some of the advantages are better finish, less energy consumption by a circular saw and less waste. Thin kerf blades are available as rip cutting, crosscutting or combination saw blades, depending upon the need. 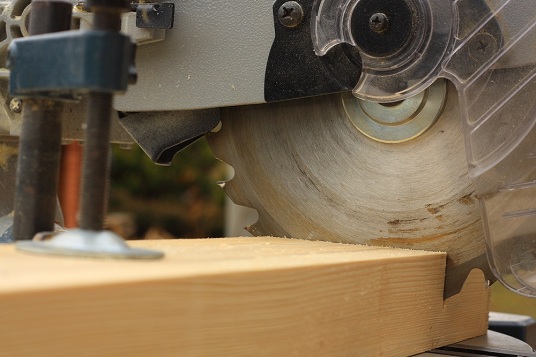 Although think kerf circular blades are available in the three different styles mentioned, they are more commonly made as combination blades, with an ATBR (alternate tooth bevel with raker) tooth grind. ATB provides the sharp edges for scoring the surface of the wood to reduce splintering while crosscutting, while at the same time, providing the FTG “raker” tooth for rapid cutting while ripping. It’s a good idea to have such a tool, especially if you often need to resaw when the dimensions of planks do not match precisely, or wherever there’s a need for a tidy and precise cut. Another advantage of thin kerf blades is that they require less energy expenditure to cut. The narrower tooth passes through the workpiece with about 75% of the effort of a normal blade. The saw motor doesn’t need to work as hard; this can be a tremendous advantage on an underpowered saw, especially when cutting extremely hard or dense woods. The only precaution that should be made is to avoid trying to cut too rapidly. As with everything in engineering, thin saw blade brings a number of shortcomings.

While the thinner kerf does provide some advantages, there are disadvantages as well. Thinner the circular saw blade, more the risk of overheating, vibrations and kickbacks.
• Less side clearance for chip dispersal – Thin teeth have almost no side clearance. The majority of the difference in saw kerf comes from narrower carbide teeth. This means that the teeth overhang the blade plate on the sides less. The wooden waste will slowly fade-out the cutting area. Lower clearance raises the risk for blade overheating, especially on long cuts and rip cuts.
• Greater blade wandering – The blade plate on a thin kerf blade is generally thinner than that of a normal kerf saw blade. The circular blade won’t be able to dissipate the heat as it does on a full kerf blade, bringing the risk of overheating. This thinner plate is more susceptible to flexing, vibration and plate warping, causing disruptions in the work.
• Increased tool marks – Thin kerf blades generally vibrate and flex more than the standard blades. This translates directly into more tooling marks in the material from the cut.
• Limited cutting depth – It’s suggested not to use thin saw blades for deep cuts.

Because of these disadvantages, most users of thin kerf blades only use them on occasion, when they are cutting wood that is costly enough to justify the use of the thin kerf blade. At other times, they switch this blade out for its more robust cousins. The downside is that the thinner plate can flutter a bit, causing a slightly rougher cut. Whiles thin kerf blades are advantageous for cutting hardwoods, they do have a higher risk of wandering and deflection on thick pieces of hardwoods. So, even though they do provide a materials savings, they aren’t often used for these thicker workpieces.